Productive AGM and committee meetings for the SYRA

It has been an exciting and eventful few months for superyacht racing with the three largest 2019 regattas now in the books.

The 12th Loro Piana Superyacht Regatta featured Performance and Cruising classes with the former having a staggered start format on the first day followed by conventional fleet starts for the remainder of the week. The Superyacht Cup Palma, the longest running superyacht regatta in the Med, produced three worthy class winners just last week.

The SYRA Annual General Meeting (AGM) in St Barths was well attended with members contributing many constructive ideas and feedback on the current challenges to superyacht racing. The minutes, agenda and exhibits are posted on our Member Meetings page. The SYRA also held three productive committee meetings during the Bucket – Fair Racing/Handicapping, Superyacht Racing Rules and Fleet Building.

We value and enjoy interacting with our members on site at the various regattas and hope that you will
take advantage of both planned and informal meetings in the future. A positive outcome of the Fair Racing meeting was the formation of a Working Party to assess the accounting of sails in the ORCsy rating rule and make recommendations to the ORC. There were follow-on meetings during the Loro Piana regatta. Details on this important issue are posted in the Fair Racing section.

I am pleased to share the very good news that Newport’s mid-summer Candy Store Cup is back following a 1-year hiatus. And there will likely to be a superyacht class again at the September Maxi Yacht Rolex Cup at the YCCS.

I look forward to seeing and hearing from members during the remainder of the 2019 superyacht regatta circuit. At any time, if you have questions or feedback, please do reach out: peter@superyra.org.

The sixth issue of the SYRA newsletter has been emailed to members and is posted here.

The fifth issue of the SYRA newsletter was emailed to members in October 2019 and is posted here.

The fourth issue of the SYRA newsletter was emailed to members in June 2019 and is posted here.

The third issue of the SYRA newsletter was emailed to members in February 2019 and is posted here. We welcome your feedback as we continue to produce what is designed to be an informative and interesting periodical for those who are involved in superyacht racing.

Changes to the Appendix SY

February, 2019
Staggered start and pursuit racing formats for superyachts create no shortage of overtaking situations on the race course. In order to minimize dangerous situations when yachts with limited maneuverability are in the process of being overtaken, RRS 17 was modified in the original Appendix SY.

In recent years there has been a fair amount of discussion, and little in the way of consensus, about overtaking on the same tack while sailing different angles. The original language in the Appendix SY, as it pertained to Rule 17 and proper course when overtaking to windward or to leeward, left room for uncertainty. This then led to some inconsistencies with the application of the rule at different regattas, which resulted in confusion for competitors on how this rule applies…(continued here)

A 2017 SYRA initiative, Corinthian Spirit racing is showing some real traction just one year later. With fleet building a primary goal, this class is designed to attract yacht owners new to superyacht racing as well as with those who participated in the past, but are not currently competing. Informal polling has revealed that the reasons for dissatisfaction from those who left racing was quite varied, and included the former handicapping rule, expenses related to yacht optimization, the need to augment permanent crew, and perceptions regarding safe racing. Read more here.

The list of ORC measured superyachts tops 50. A welcome change in superyacht racing in recent years has been a growing sense of confidence from owners and sailors that the superyacht rating rule of choice (ORCsy) has enhanced fair racing. A fully transparent VPP has played a meaningful role in the popularity of the rule, which debuted 4 short years ago. But so too has the fact that measured data is steadily replacing declared data fleet wide. As of December 2017, 50 superyachts were fully measured with another 18 partially measured or scheduled early in 2018. Read more here.

An ambitious initiative to develop a rating system for superyachts began in 2014. In eight months, the team developed the new system, designed to meet the goals of transparency and fair sailing. Due to their extraordinary efforts, the new rule made a successful debut at the 2015 Loro Piana Caribbean Superyacht Regatta and at the St Barths Bucket after that. They continue to apply their talents and diligent efforts to ongoing improvement efforts and refinement of the ORCsy Rule. 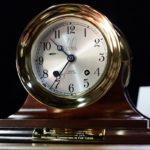 The Inscription Reads:
SuperYacht Racing Association
Presented with sincere thanks to
The ORC Technical Team
For their contributions to Fair Sailing

The SuperYacht Racing Association (SYRA) membership, in conjunction with the Offshore Racing Congress (ORC) has developed a new initiative: the Corinthian Spirit Class.
The superyacht racing circuit is thriving with new yacht owners coming on the scene every year. Yet stakeholders agree that there is a need to broaden the appeal of superyacht regattas. Recognizing this need, a new class has been developed with the primary goal of attracting more yacht owners and growing participation. The Corinthian Spirit Class offers an alternative to what is viewed by some as increasingly competitive and resource intensive racing. 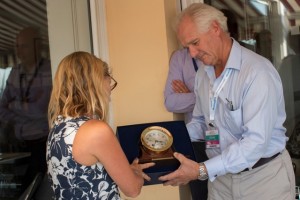 Ed was an extraordinary talent and friend. His legacy is a remarkable one and the SYRA is honored to be a small part of it. It was his drive and vision that saw the need for and gave life to the SuperYacht Racing Association. All those who race superyachts or are part of this industry are indebted to him for his many contributions and creative ideas.

It is with great sadness that we say good-bye to a very special man. We will continue to strive to meet his goals of safe and fair racing with the zeal and good humor that were uniquely his.

From the Dubois team official press statement: “Ed Dubois was a huge talent and his legacy will continue as one of the world’s great yacht designers. Known not only for his love of all things boat-related, but also music, art, travel and most of all, his family and friends. Ed leaves his darling wife Honor and four wonderful children, to whom he was completely devoted.”

A complete and touching obituary is posted here: telegraph.co.uk 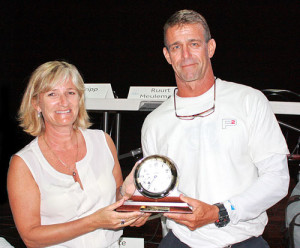 At the SuperYacht Racing Association’s Annual General Meeting, held on 16 March 2016 at Salle de Théâtre, Gustavia St Barths, movers and shakers in the superyacht world participated in discussions and updates.

SYRA Executive Committee Co-Chair Kate Branagh awarded SYRA’s annual recognition trophy to Captain Jonathan Kline (a member of the SYRA Executive Committee and the Communications Officer on P2). He was presented with a beautiful, handcrafted Ship’s Bell Clock from Chelsea Clock for his many contributions to the advancement of safe racing. “Because of him, we are in a far better place than we were 18 months ago,” said Executive Director Peter Craig.